Spend enough time around BMW racing parts and you will see reference to Group N. As in Group N control arm bushings or motor mounts. And you might be wondering what Group N is.

Group N is a class of production-based race or rally cars in Europe, Japan, and Australia and it's sanctioned by the FIA (the major international motorsports association). In the USA it would fall close to our showroom stock or SCCA Touring classes. Group N racing in Europe dates back to the early 1980s. The two major production-based racing series then were Group N and Group A (for cars with nearly unlimited modifications). Both classes have evolved over the years to become the various Touring Car, Super Touring, Super 2000, and VLN series now operating. Since BMW has always been heavily involved in European-based racing they took great interest in developing parts and support for their domestic racing customers.

Group N racecars are built from regular street cars and allowed a limited number of modifications. The cars are generally stripped of non-essential interior equipment save for the dashboard, door panels, and various trim and the exterior bodywork is usually standard. Suspension and brake upgrades are allowed so long as they don't radically deviate from the stock layout and design. Engine changes are very limited. The intent is that the cars look and perform much like a regular street car but with improvements necessary to optimize the road car for the race track. The limited allowed modifications means that every small change needs to have big result.

BMW Motorsport's focus in Group N development has always been with suspension and driveline upgrades. With a strong motorsport background, driving dynamics has never been a weak point with BMWs and the general suspension layout and design is great for motorsport use. But the rules are strictly defined to keep the cars from straying too far from their production roots. Under the rules, bushing materials must remain the same as the original part. So instead of using a rigid Delrin or metallic bushing, BMW engineers must reinvent the stock part to suit their needs. Simply changing the bushings from a standard pliable rubber piece to something stiffer with less deflection will last longer and work better on the racetrack. Most changes are simple but have a huge impact on performance and durability.

Does this mean the Group N part is better? Yes, but with some drawbacks. BMW Motorsport may redesign the part to last longer under racing conditions but they also made it stiffer to reduce unwanted movement. A stiffer suspension bushing will keep your alignment within spec but is not ideal for street use. As with any upgrade you make on your car, the part's design should meet your intended use. Group N bushings may be exactly what want you if you're looking for a stiffer bushing in a material other than urethane, Delrin, or metal. 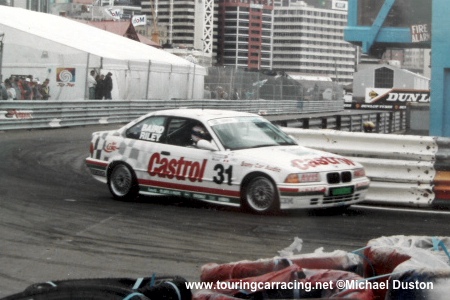